At BIZON we often get many customers who want to switch from a Mac to a PC Workstation. While there are many reasons our customers want a change, it usually comes down to one major factor, performance.

Whatever you use your Mac or Workstation PC for, performance is important to help you manage your workflow, to ensure your game runs smoothly, for high-quality sound and graphics, and to edit videos efficiently.

The rise in 4K, 6K, and 8K workflows makes optimum performance a necessity for many people, so it is essential to make the right choice when considering a computer.

With performance being the most important factor when deciding between a PC or a Mac, we take a look at why a PC is a better option to use Adobe’s Premiere Pro video editing application compared to a Mac or iMac Pro 2019.

To find out whether a PC or Mac is a best video editing workstation, we took three iMac systems and a PC workstation of a similar price and tested them across performance for live playback, render in to out, and export.

If you love data we’re sure you’ll enjoy looking at our charts, which show how the systems compare, but if charts aren’t your thing you can always scroll past the data to read our conclusion. 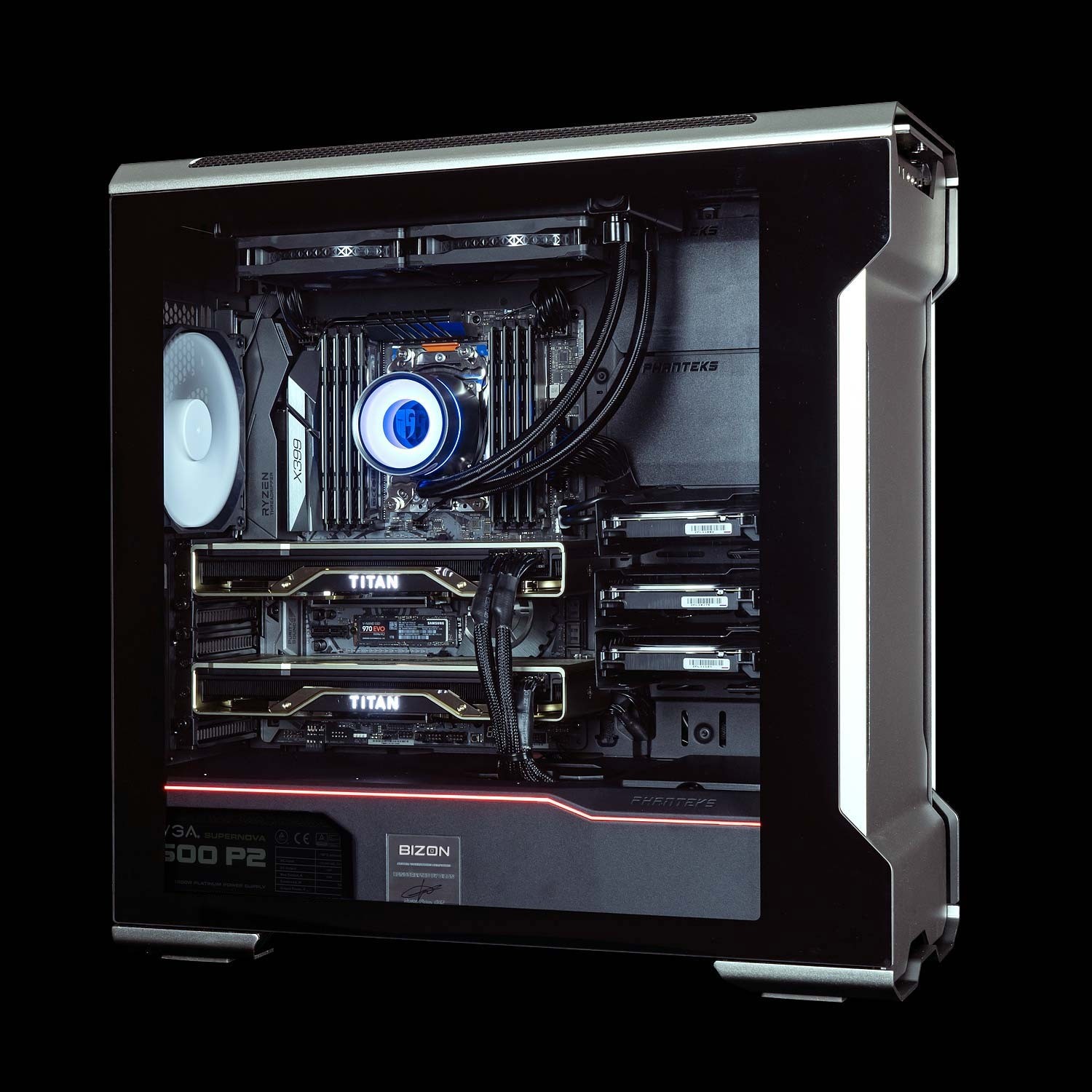 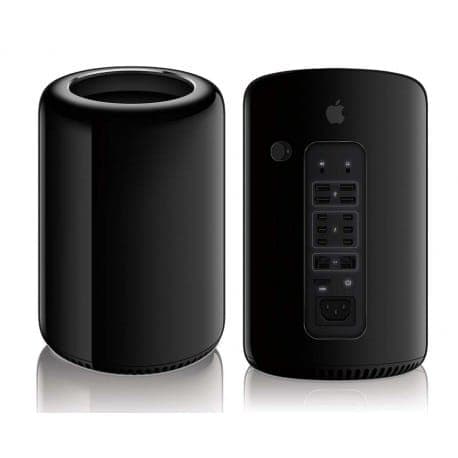 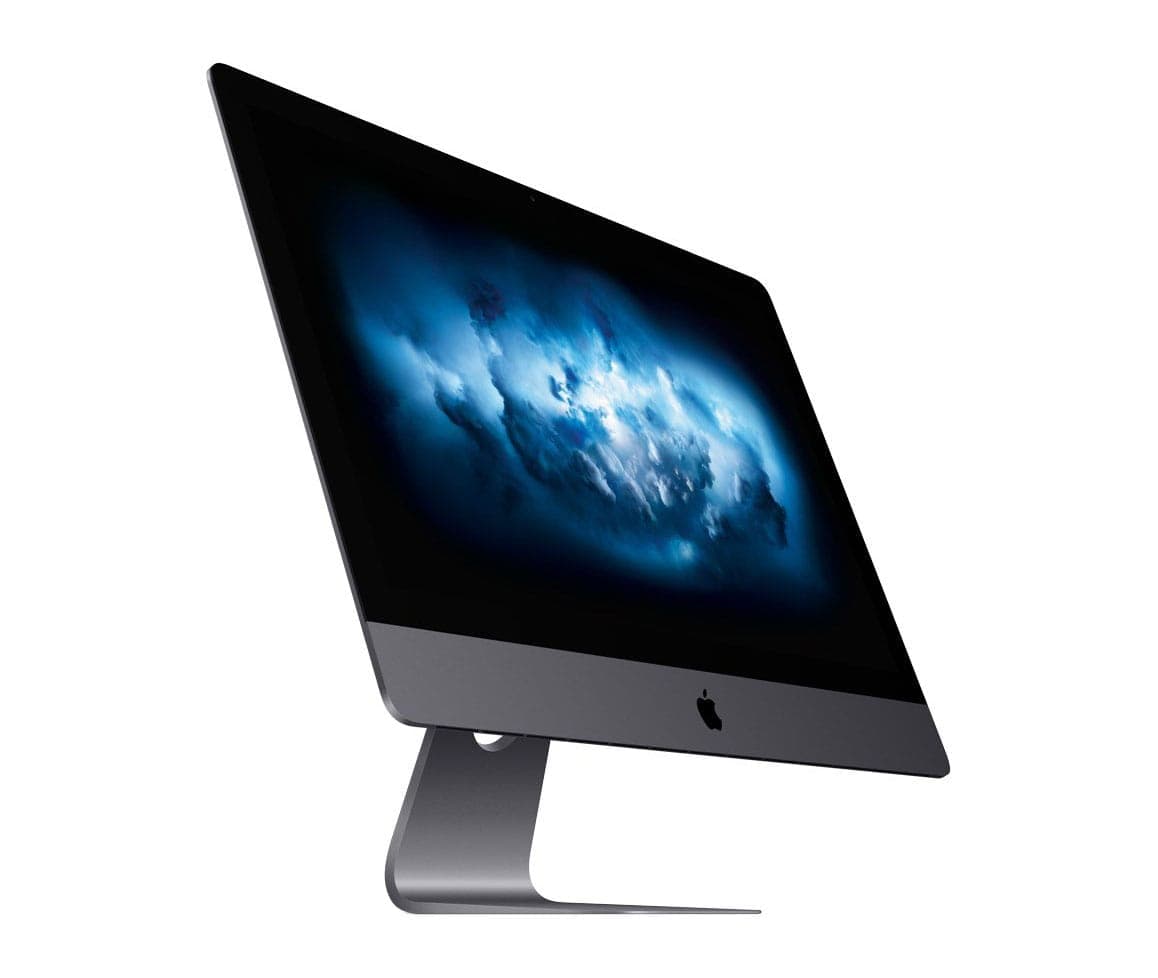 For a fair comparison we kept the specs and pricing as similar as possible. For example, as Mac systems only support a single internal drive, we used a single 1TB PCI-E SSD drive on our BIZON Workstation PC, rather than multiple storage drives, which improve performance when generating peak files and importing media. As the iMac Pro requires a keyboard and mouse, we also bought a monitor, keyboard, and mouse for the Mac Pro and PC.

To compare the systems, we tested three different functions in Premiere Pro: live playback, export, and render in to out.

Although we didn’t cover every available codec, we covered a large number of RED clips so that we could really see how different compression levels impact performance. Our tests also used three different timelines to stimulate different types of workload.

We recorded the export time from the moment the ‘Export’ button was clicked until completion. We also measured Live playback FPS (frames per second) based on the number of dropped frames relative to the total number of frames in the sequence. For example, by dropping 100 frames in the 4K ProRes 422 HQ "Basic" timeline (which has 579 frames), you will render 479 frames over 24 seconds for a result of ~20 FPS.

We used Lumetri effects from the "Lumetri Presets –> Speedlooks –> Universal" effects folder. However, if you’re using a Mac you’ll probably need to delete and re-apply the Lumetri Color effects, as sometimes they don’t translate properly from the PC to Mac.

It can be a challenge to accurately test live playback performance because performance depends on the codec and resolution of your media, as well as the playback resolution (full, half, etc.) and the effects you’ve applied.

At BIZON we often get asked about live playback performance, so we decided to test our media with three different timelines, as well as with a full and half playback resolution. We also decided to calculate the average performance of each system relative to the 10-core iMac Pro using OpenCL.

We found that using Metal with a Mac is a bad idea for playback performance and found a 20-30% drop in FPS with most of our test media, and a massive drop in FPS with RED footage when using Metal on the Mac system. For example, with 4K RED 11:1 footage the iMac Pro 14-core went from 24FPS to 6FPS without any effects being applied to the footage.

Even when using OpenCL you will get a bump in FPS with a PC. However, compared to the iMac-Pro 10-core, our PC workstation gave 25% higher FPS with ProRes media, 30% higher with DNxHR HQ/H.264/ARRIRAW, and almost 75% higher FPS with RED footage, and was 94% faster on average in our ‘Heavy Effects’ test.

In comparison, the 14-core iMac Pro did slightly better with RED footage and was about 10% faster than the 10-core iMac Pro. However, the PC workstation was the clear winner for playback performance and was 25-60% faster depending on the type of footage used; making our PC workstation a better option for FPS as well as better value for money. 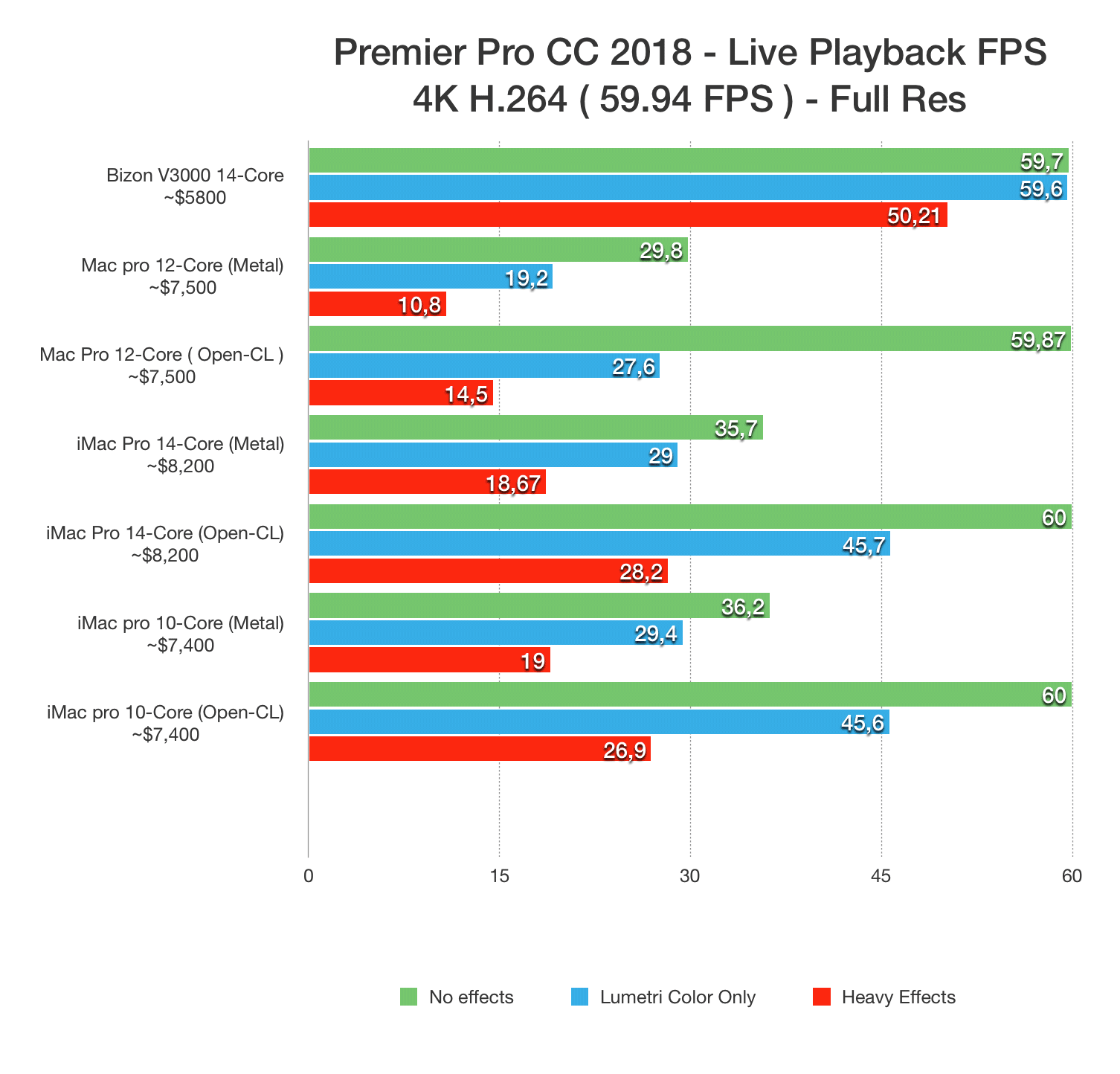 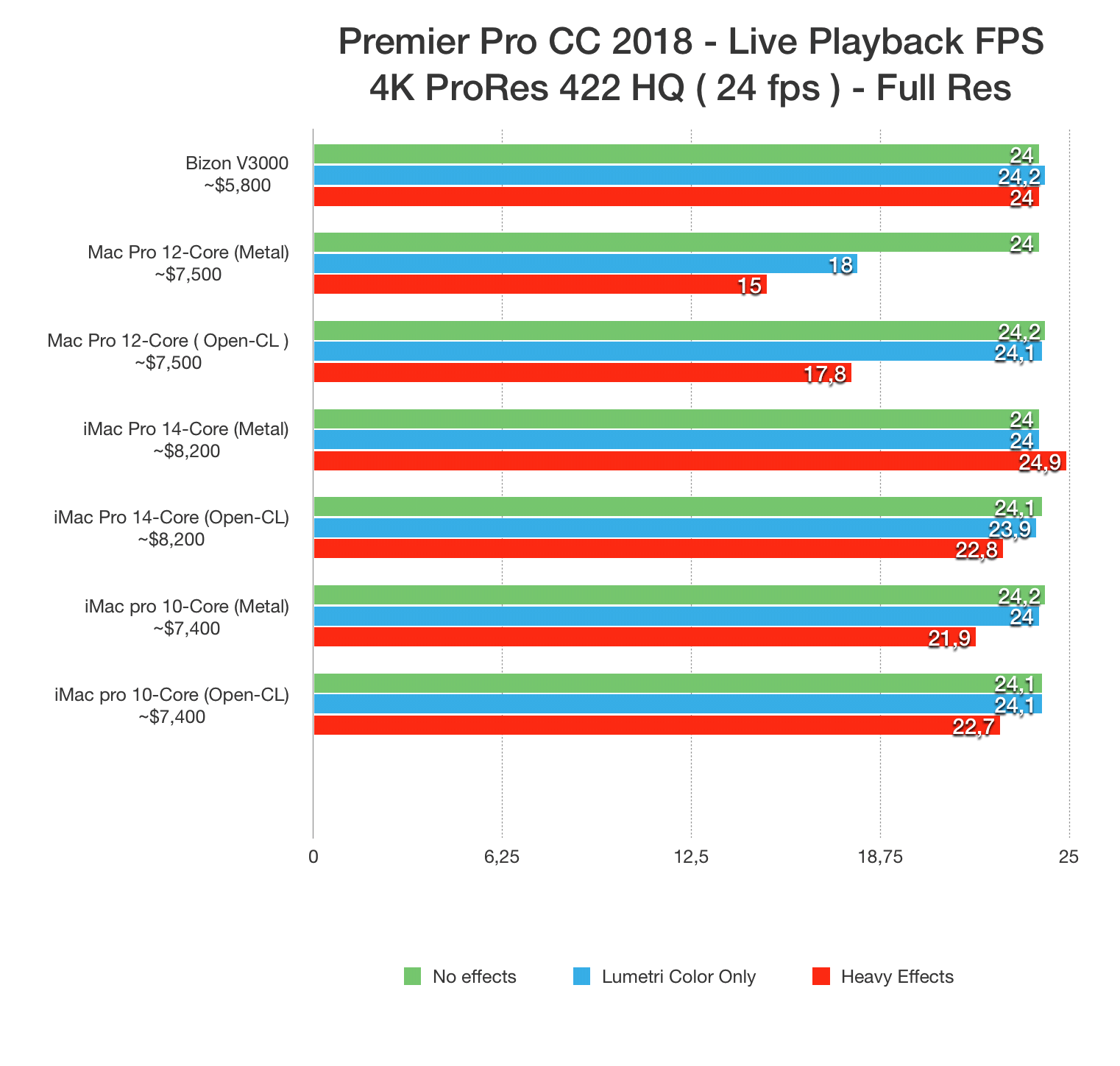 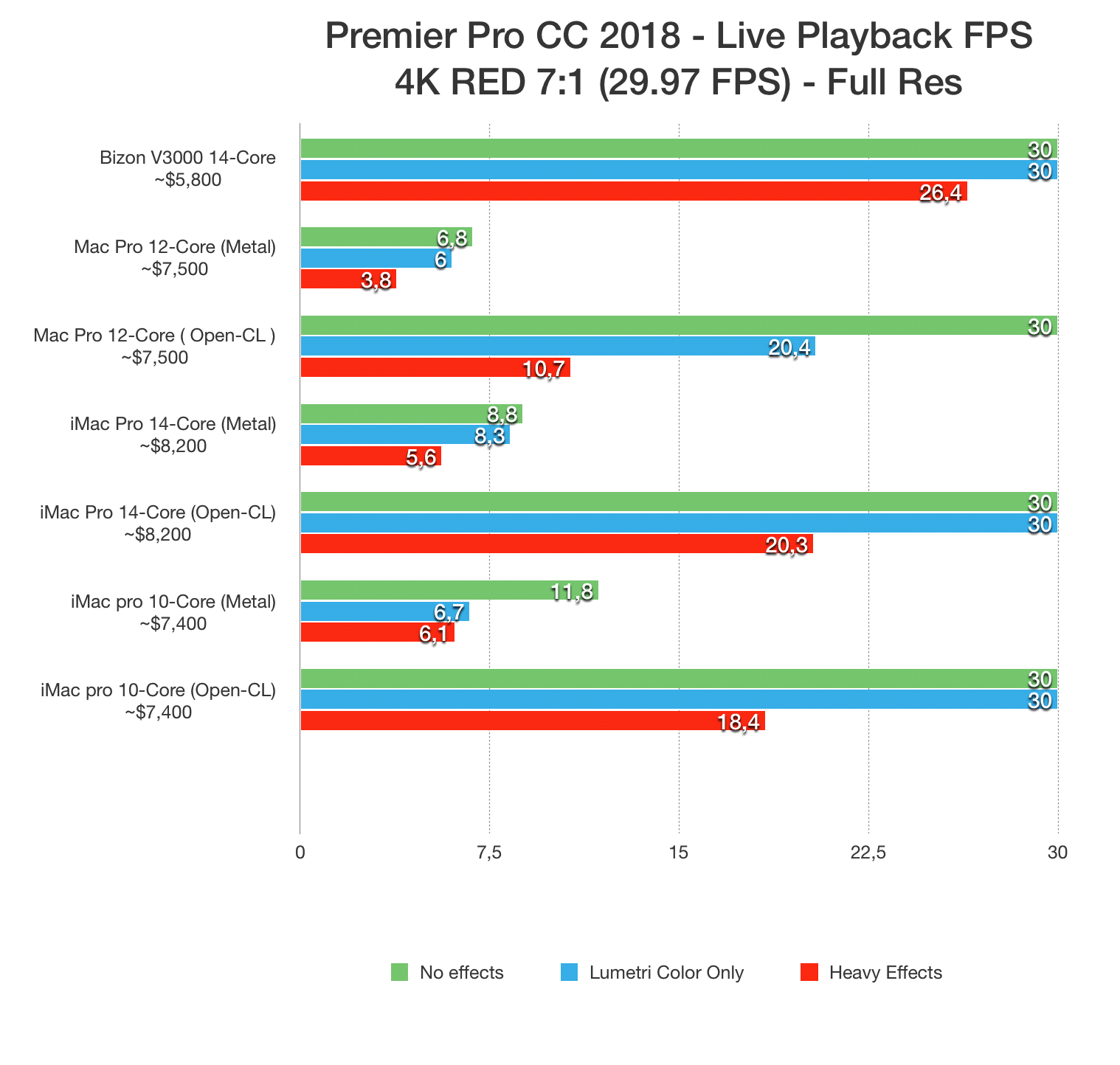 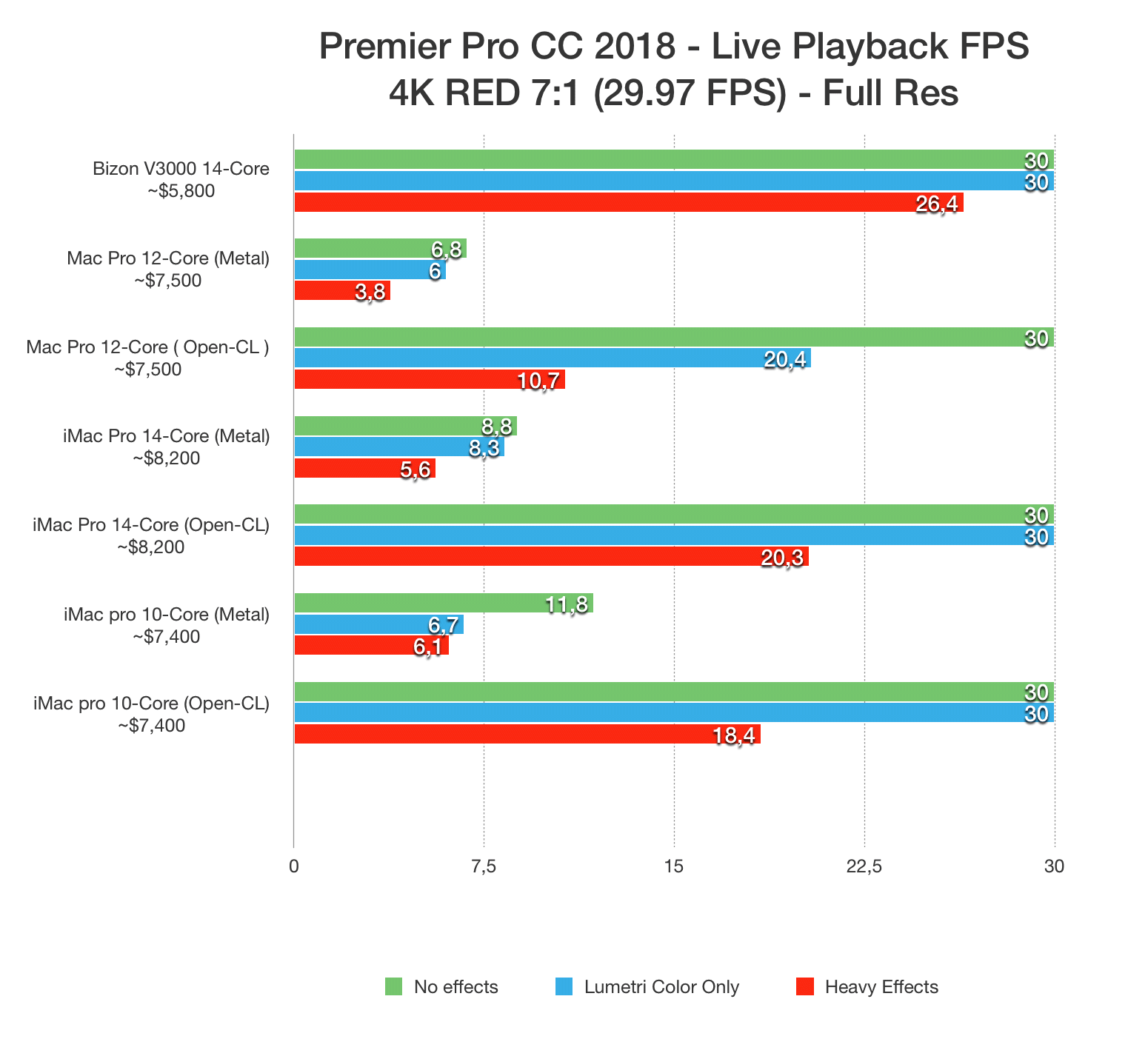 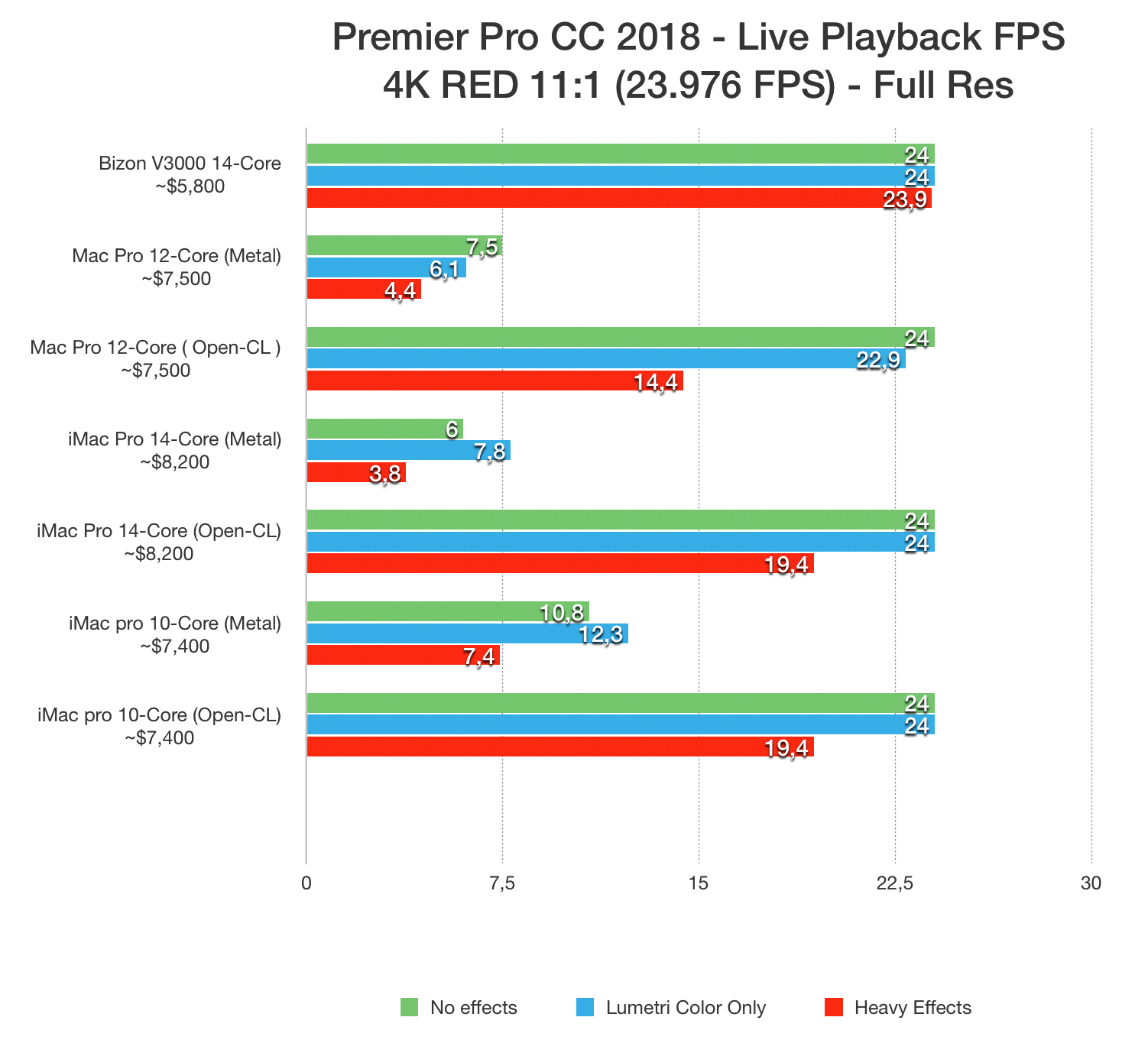 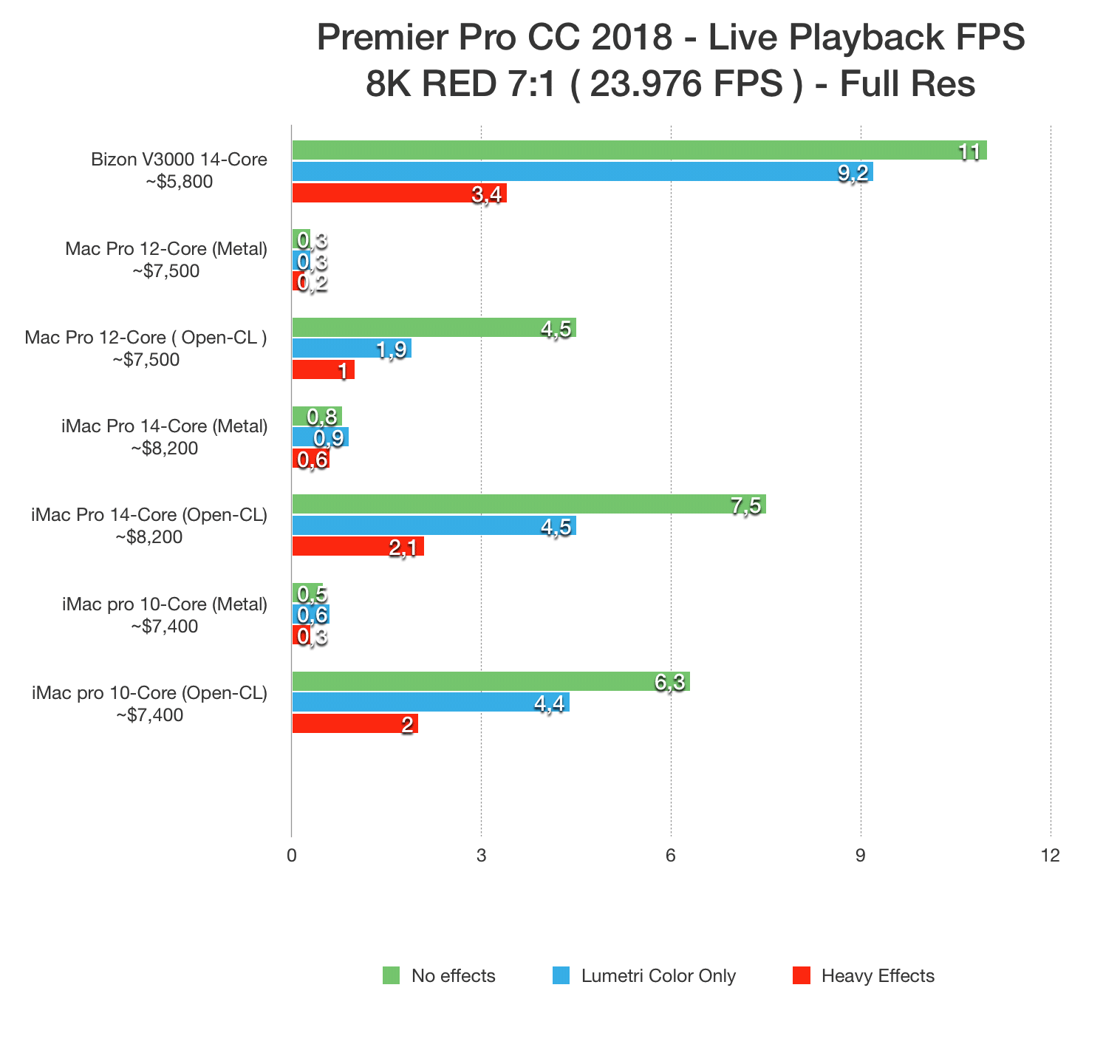 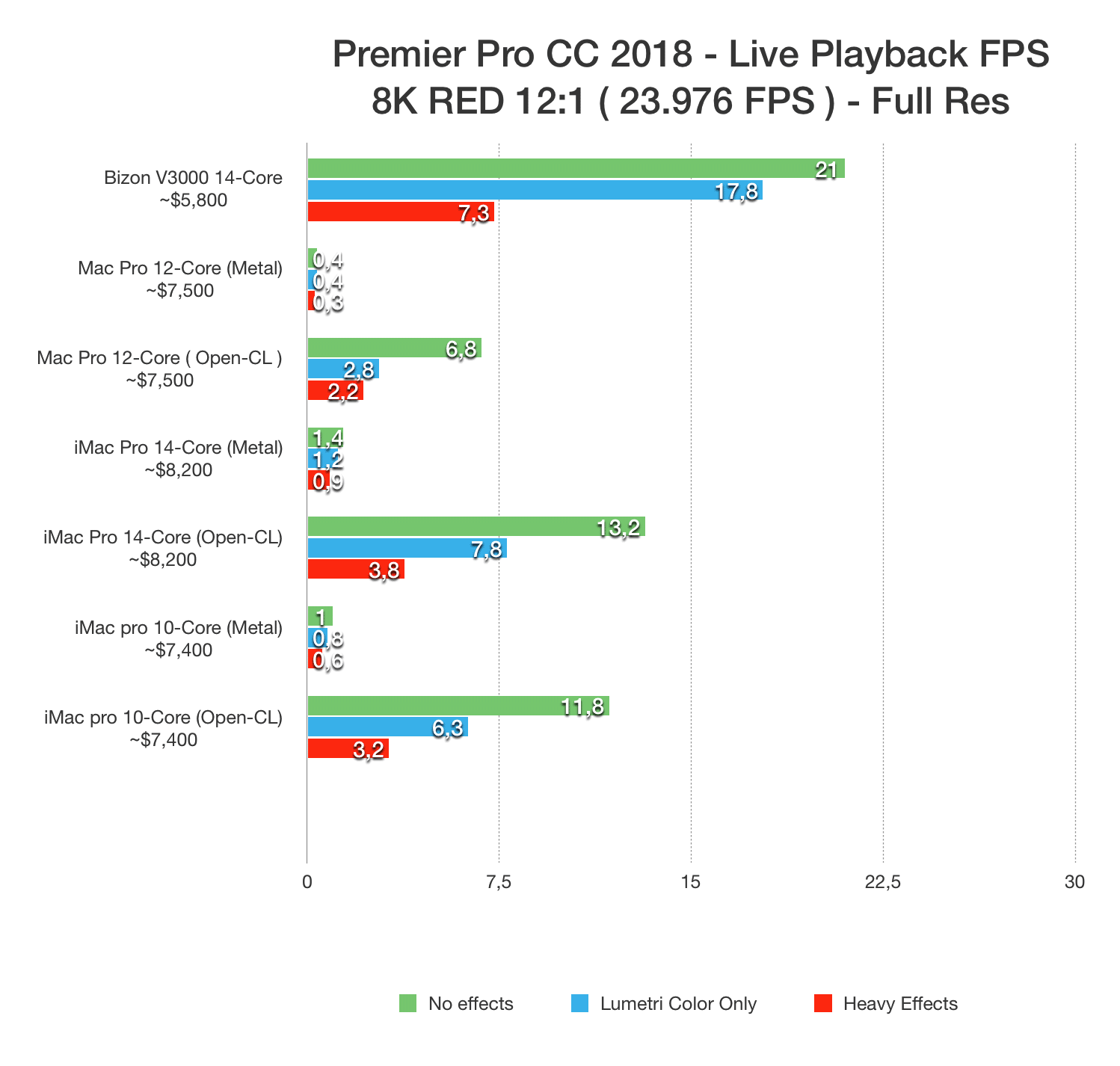 It takes time to export on Premiere Pro and export time is often used to measure performance. Taking 4K, 6K, and 8K projects using the different codecs listed in the Test Hardware & Methodology section we measured export performance on all the systems.

With our export tests we found using Metal on a Mac, rather than OpenCL often resulted in a decent performance gain. RED footage was an exception, usually taking twice as long or longer to export with Metal. However, as our findings in the Live Playback test show, Metal was significantly worse than OpenCL, so keeping Premiere Pro in OpenCL mode will be the best option for most Mac users.

If you do decide to stick with OpenCL a PC is your best option, as our Custom workstation computer exported projects approximately 40% faster than the iMac Pro 2019 10–Core. The performance gap closed by a small amount with the 14-core iMac, but the PC still had a 30–40% performance lead. Surprisingly, the Mac Pro managed to keep up with the newer iMac Pro systems with ProRes footage, but fell behind with other types of media, making our PC workstation 40% to 60% faster, as well as saving you a whopping $2,000 on price.

If you’re willing to switch between Metal for exporting non-RED footage and OpenCL for live playback, the Mac systems do better. However, the iMac Pro systems were still around 15% slower with DNxHR, H.264, and ARRIRAW footage, although the 14-core iMac Pro was able to pull slightly ahead of our BIZON V5000 PC with ProRes footage. 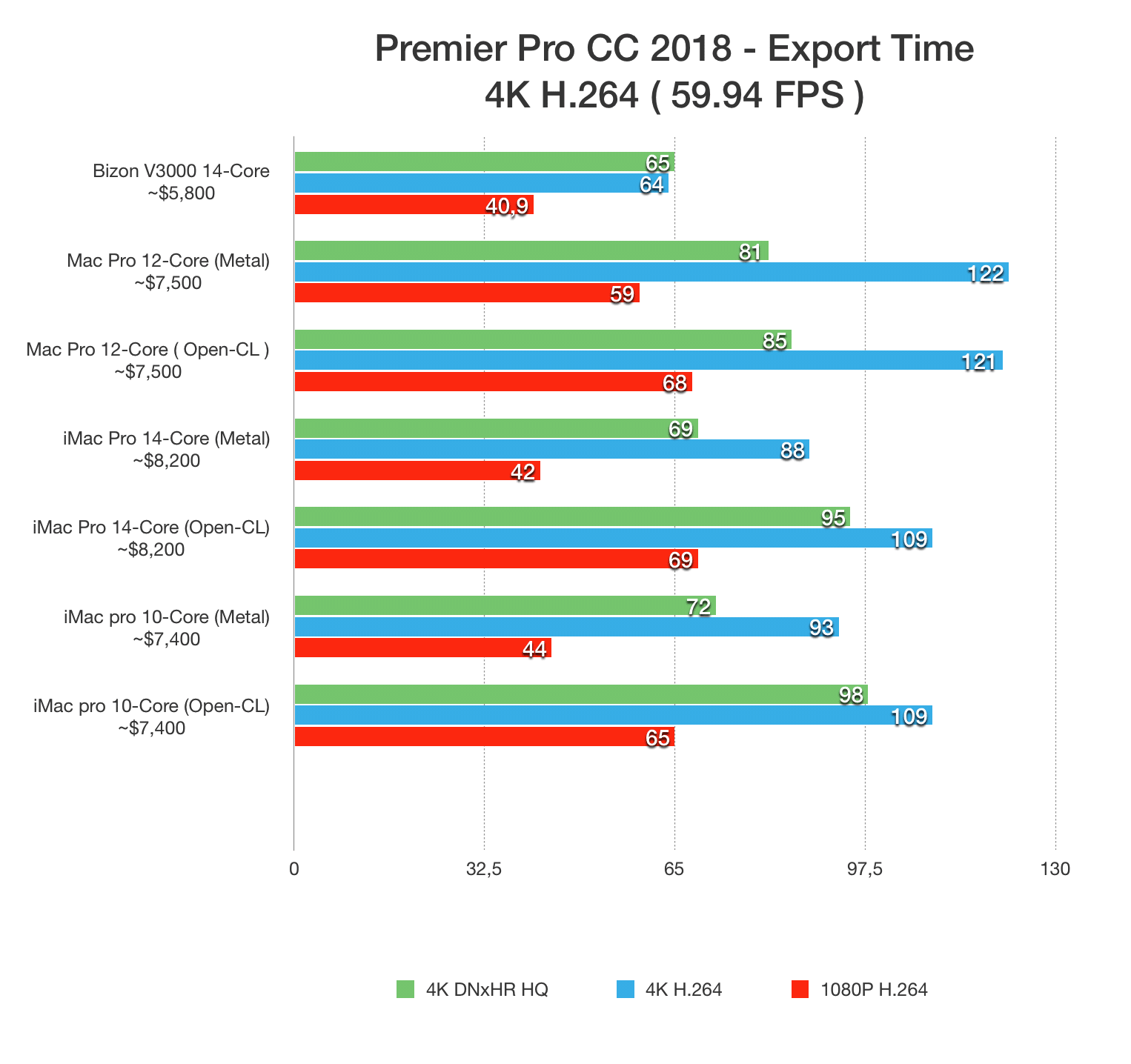 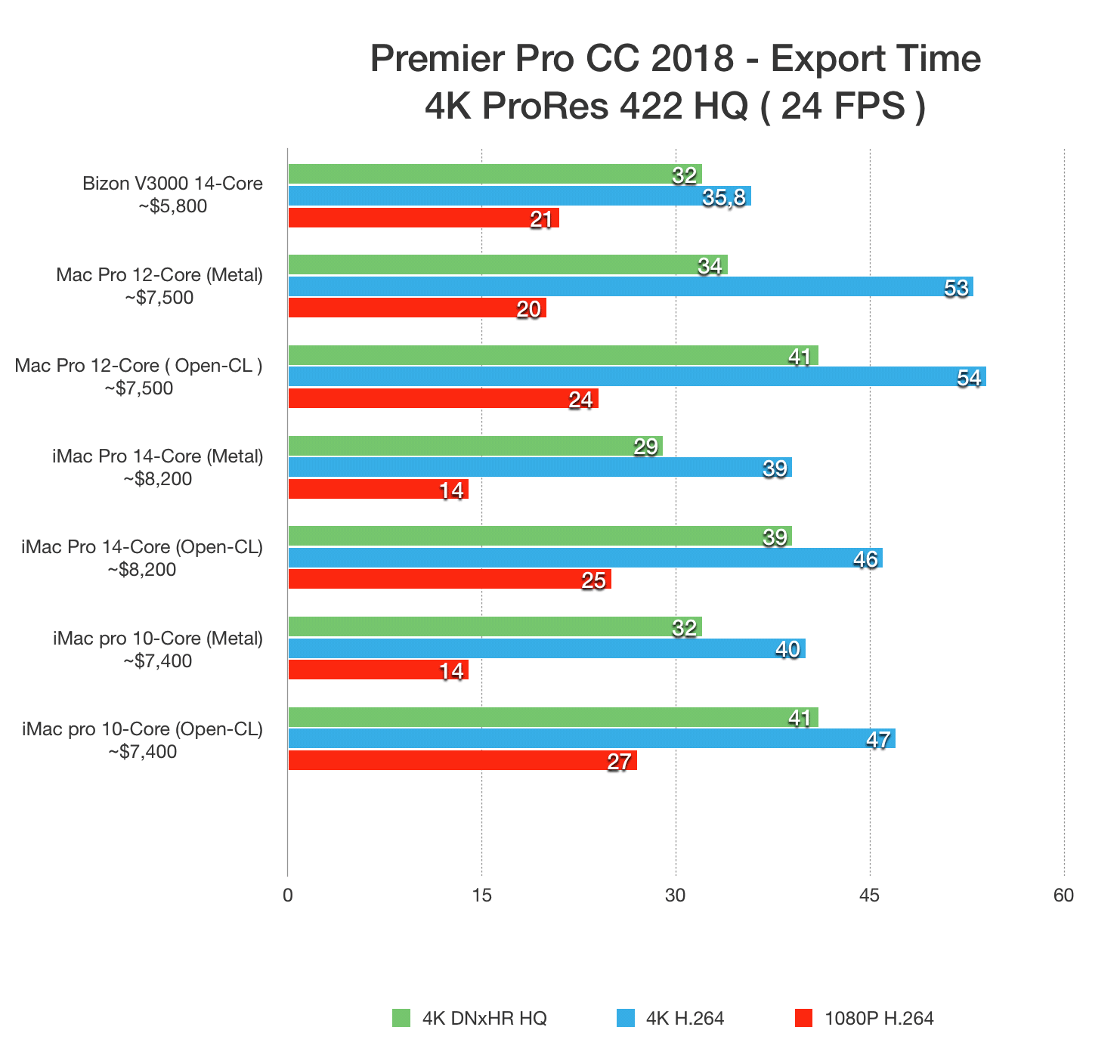 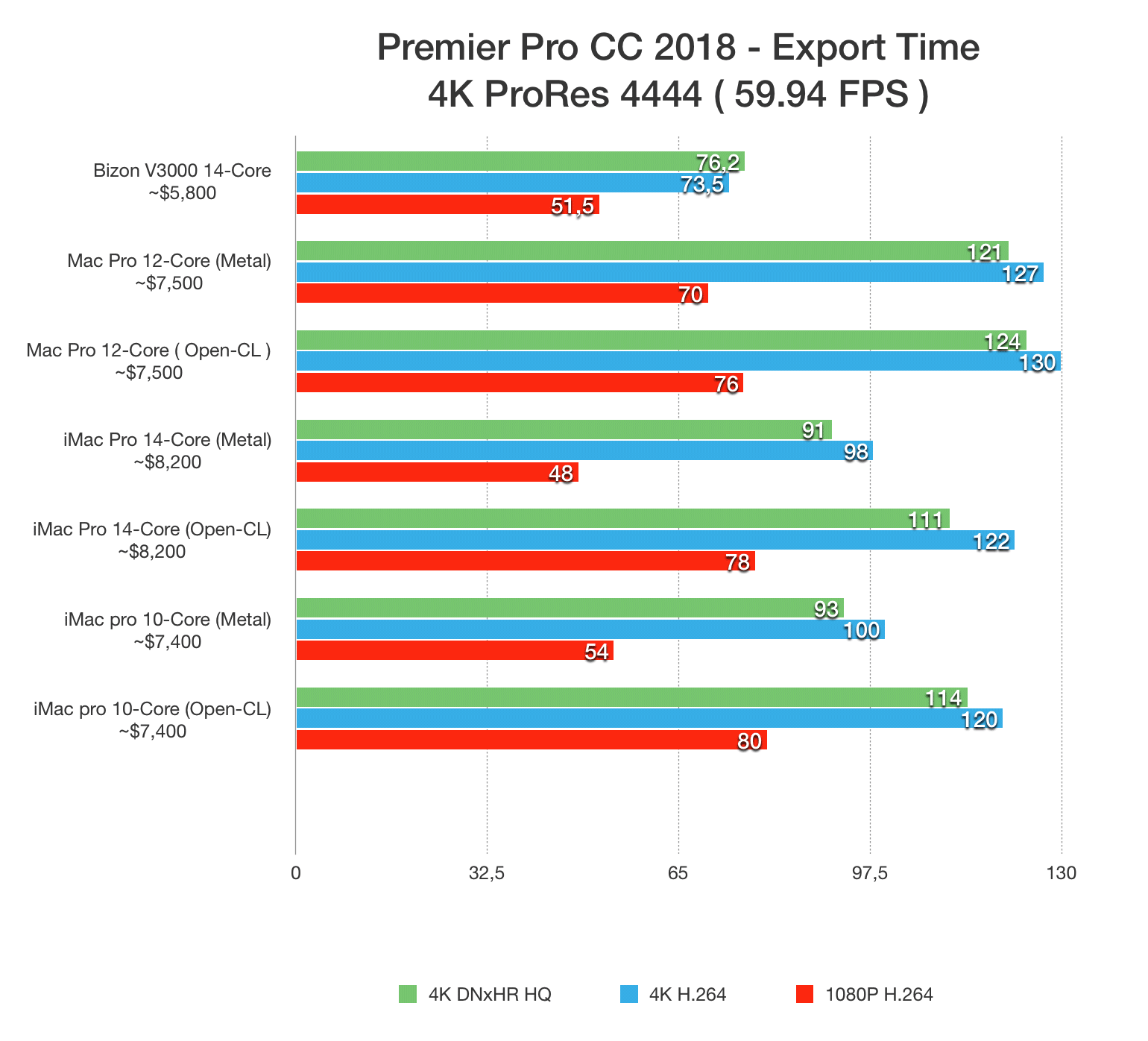 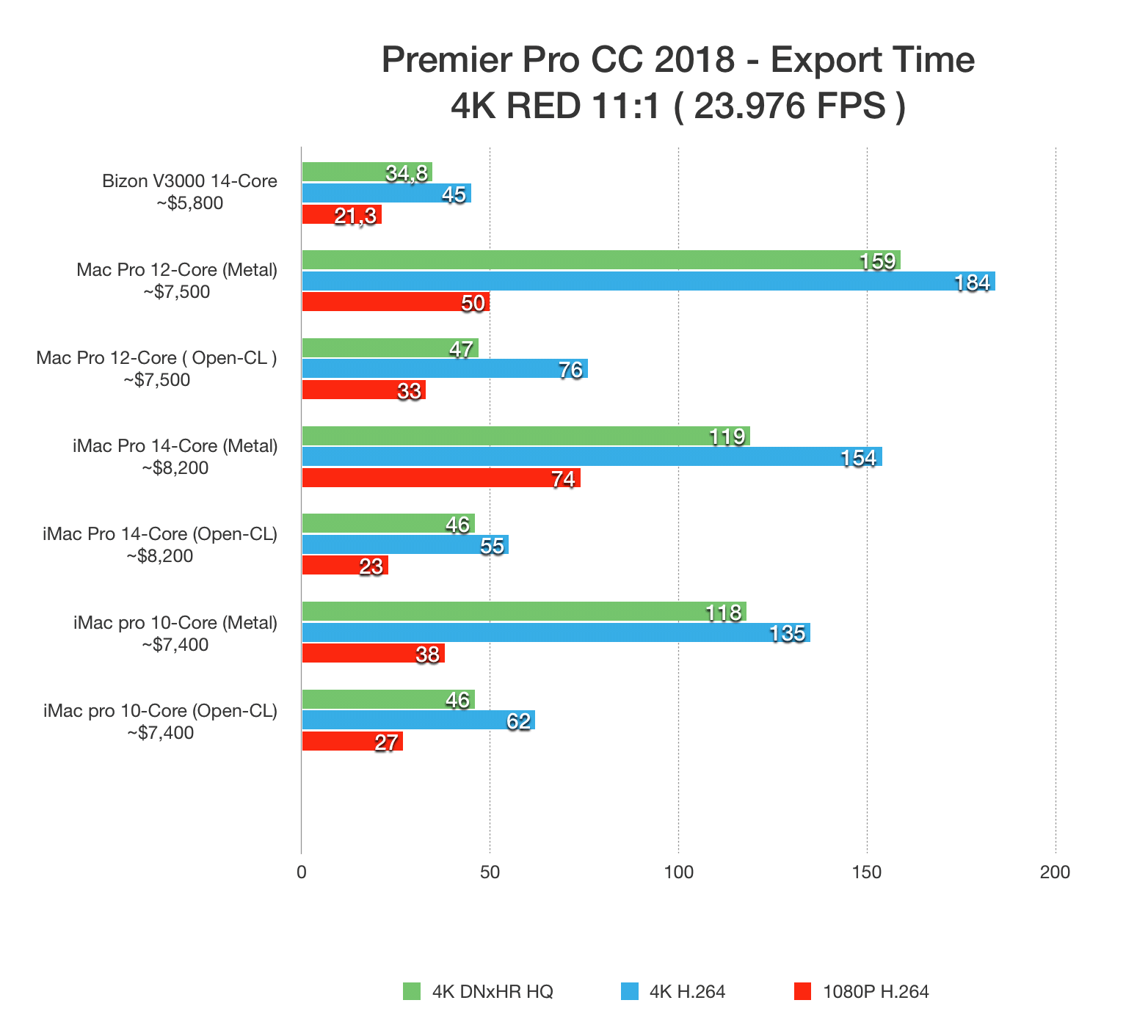 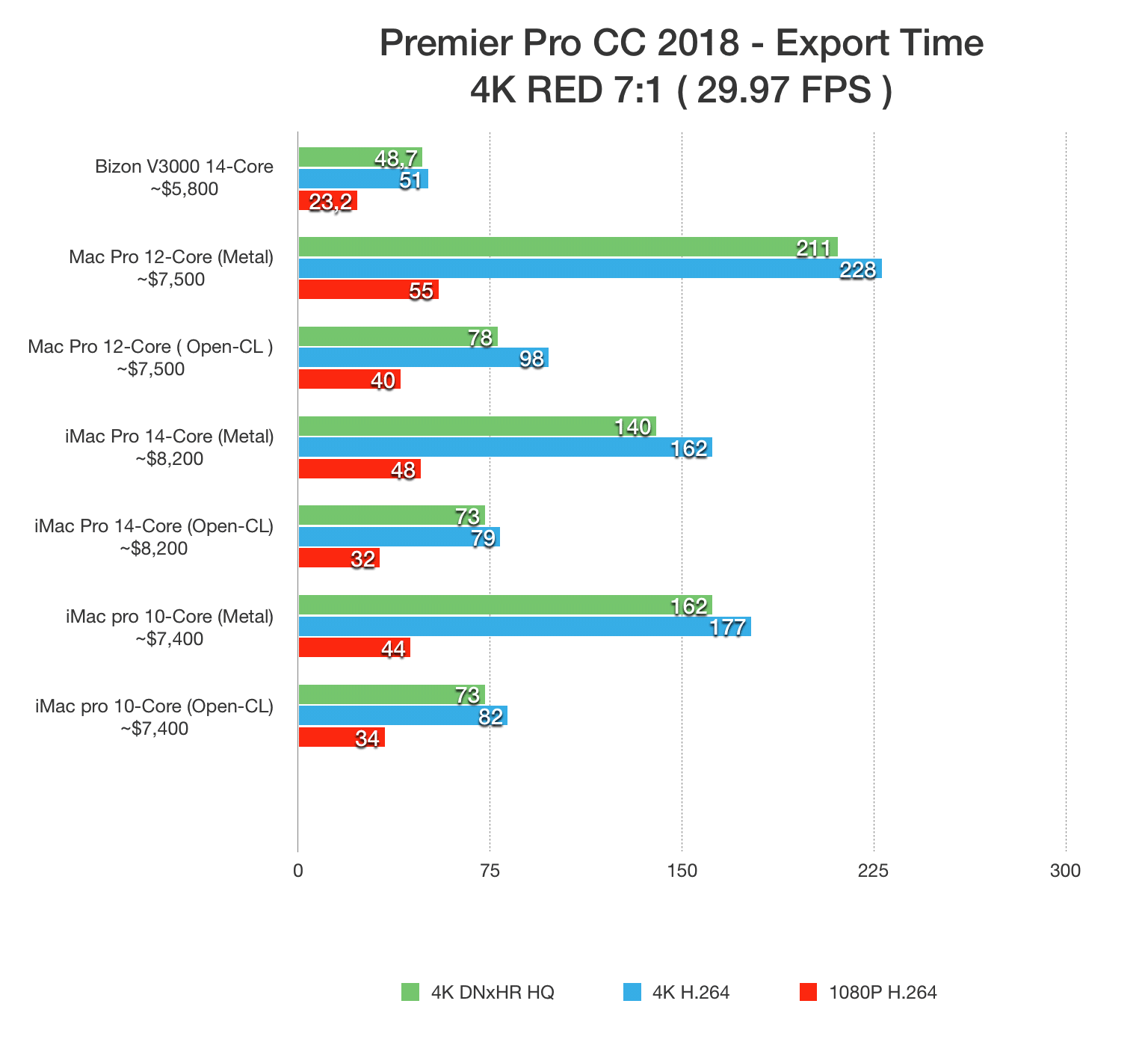 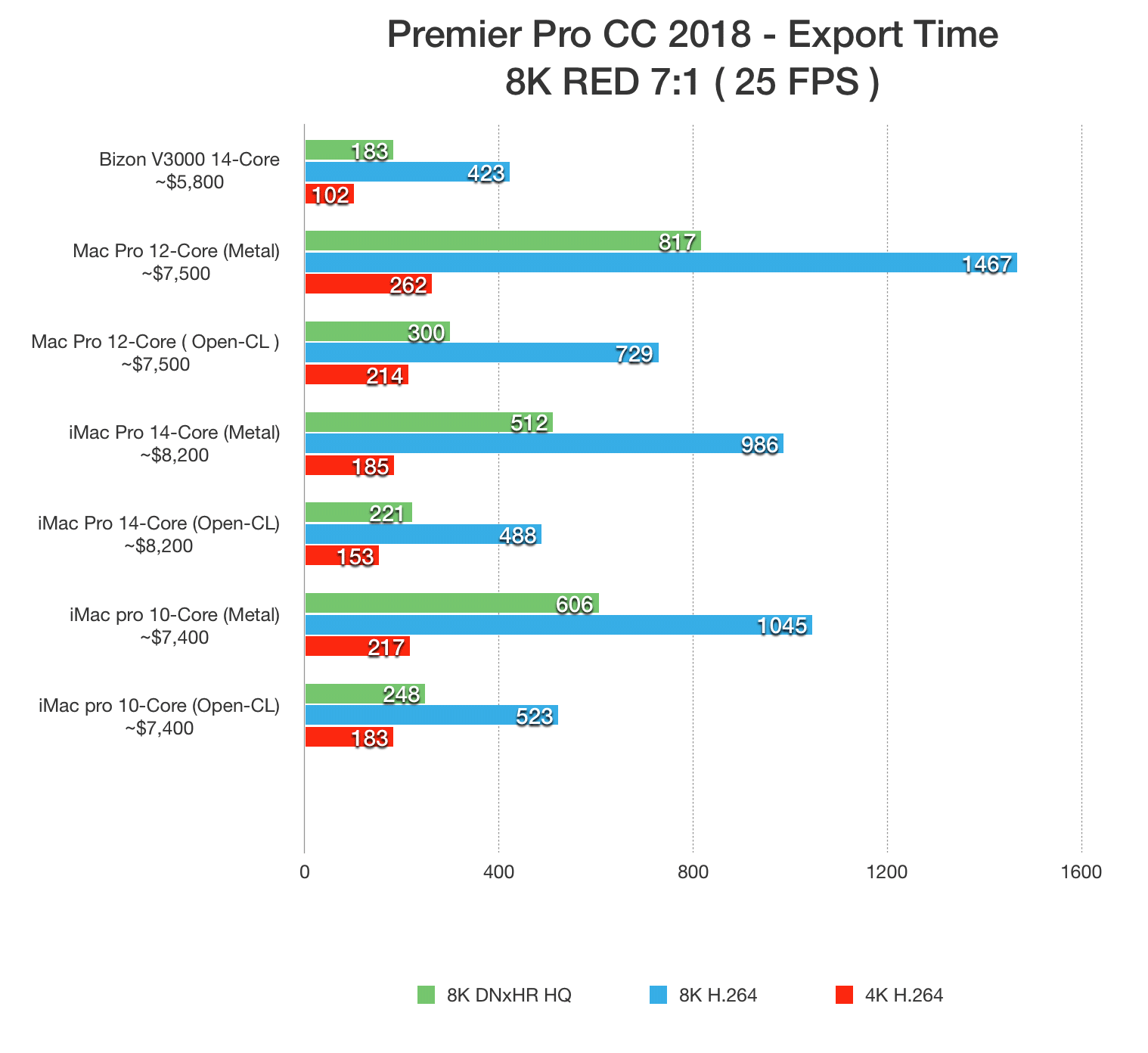 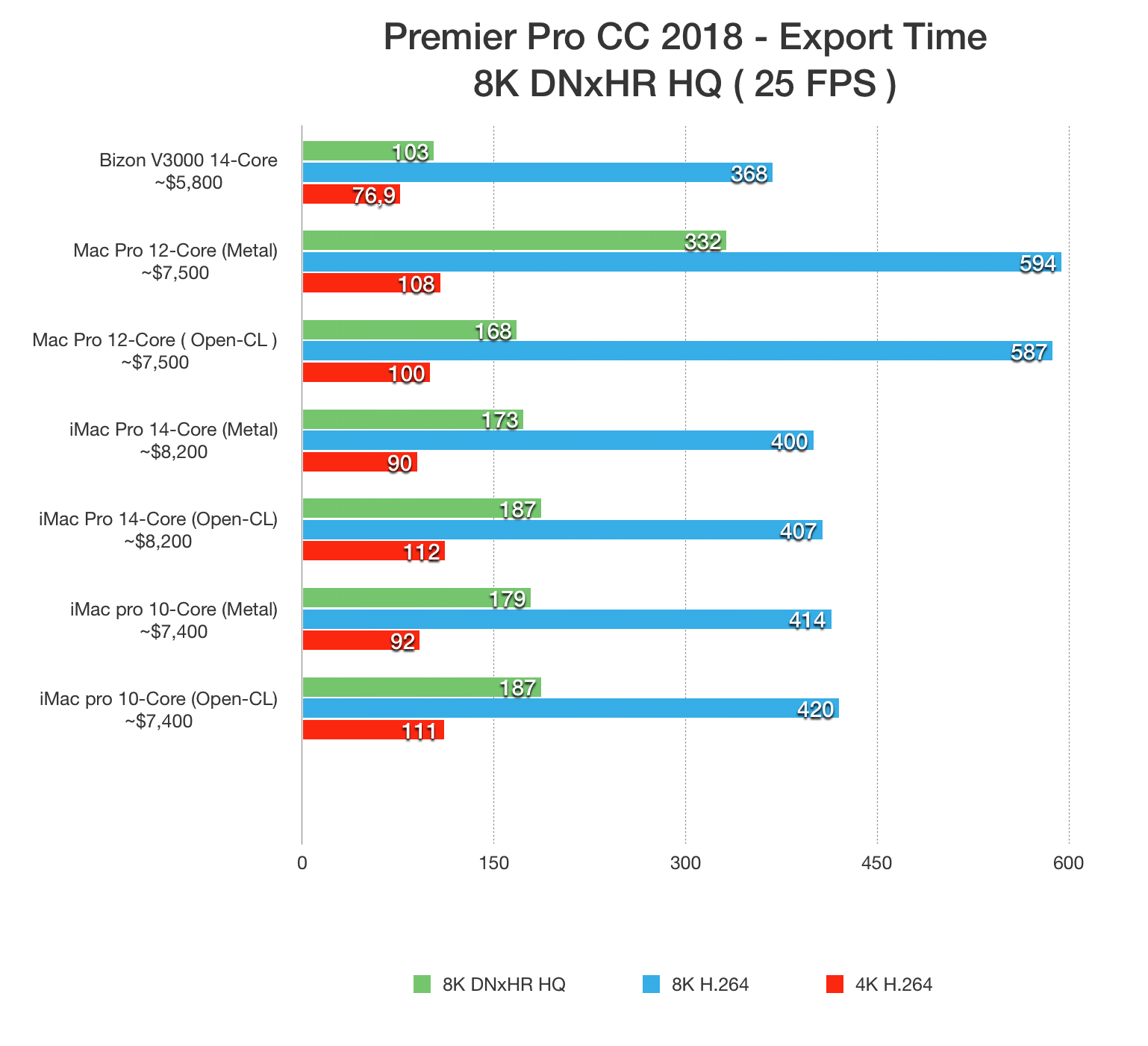 Render in to out results

Rendering previews are sometimes a necessity, so we tested the ability to render in to out on all the systems for 4K, 6K, and 8K projects using the different codecs listed in the Test Hardware & Methodology section.

Using Metal on the Mac caused another performance problem, with RED footage dropping to 15-20%. However, due to the lower live playback performance with Metal across the media tested, we feel OpenCL offers the most valid comparison across the PC and Mac systems.

With ProRes media, there was around a 40% performance gain with the PC compared to iMac and Mac Pro. This reduces slightly with DNxHR HQ, H.264, and ARRIRAW media, but our PC was still faster and outperformed the Mac by around 35%.

Surprisingly, our PC had a smaller performance gain in RED media compared to the other tests, however, the PC was still around 20% faster than the 14-core iMac Pro.

Impressively, PC performance was also 30% faster than the 10-core iMac Pro and 40% faster compared to the Mac Pro. 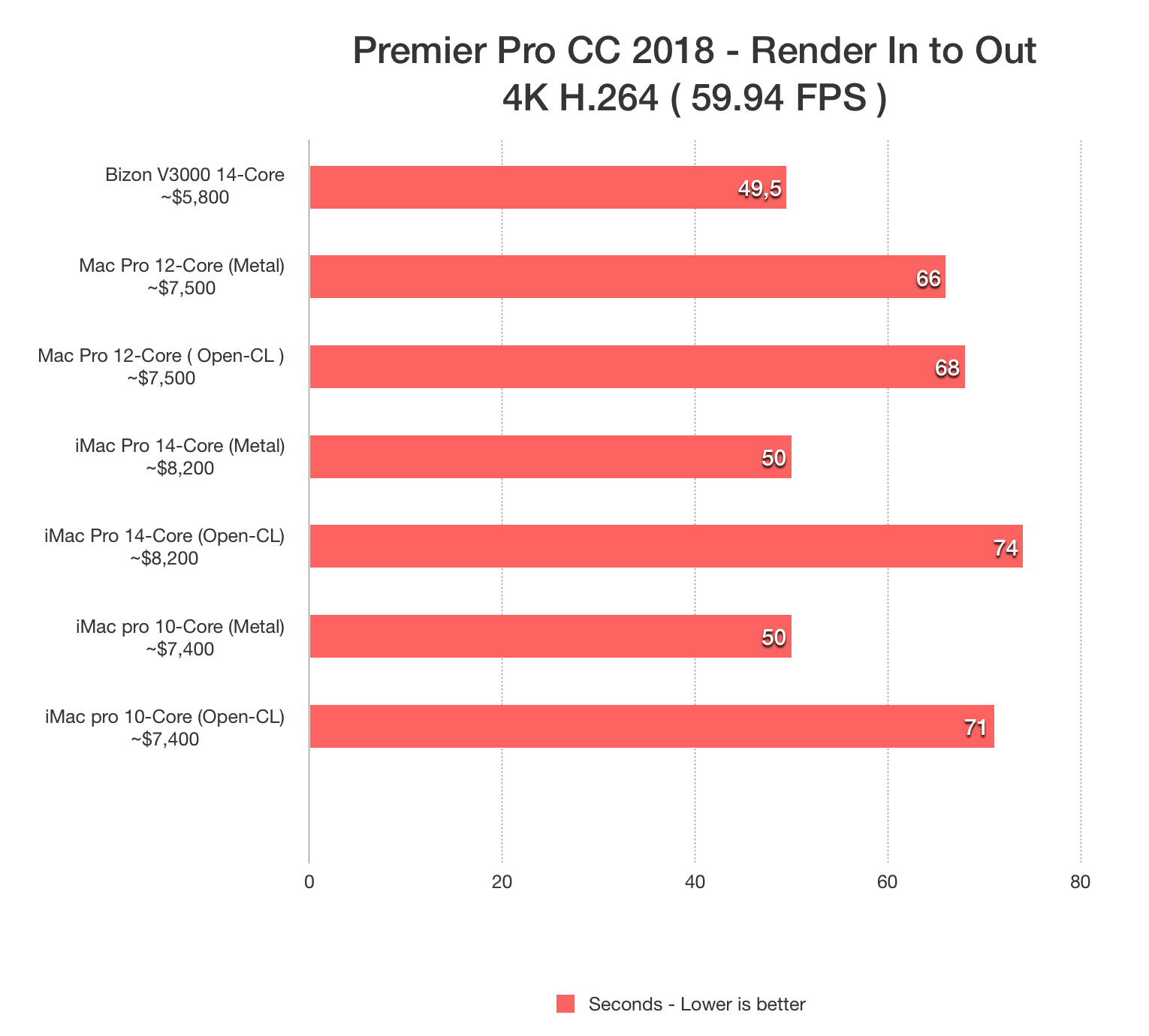 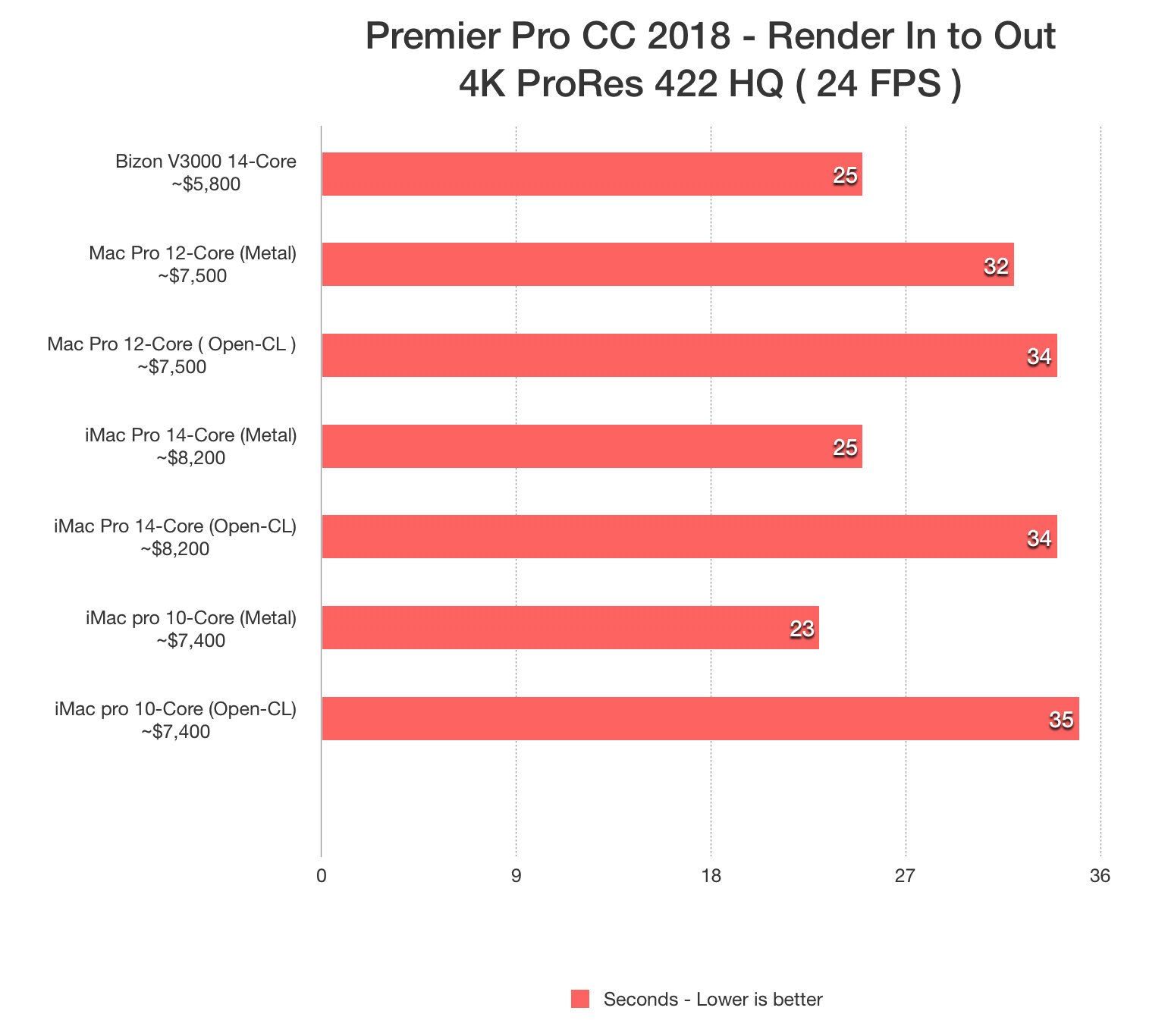 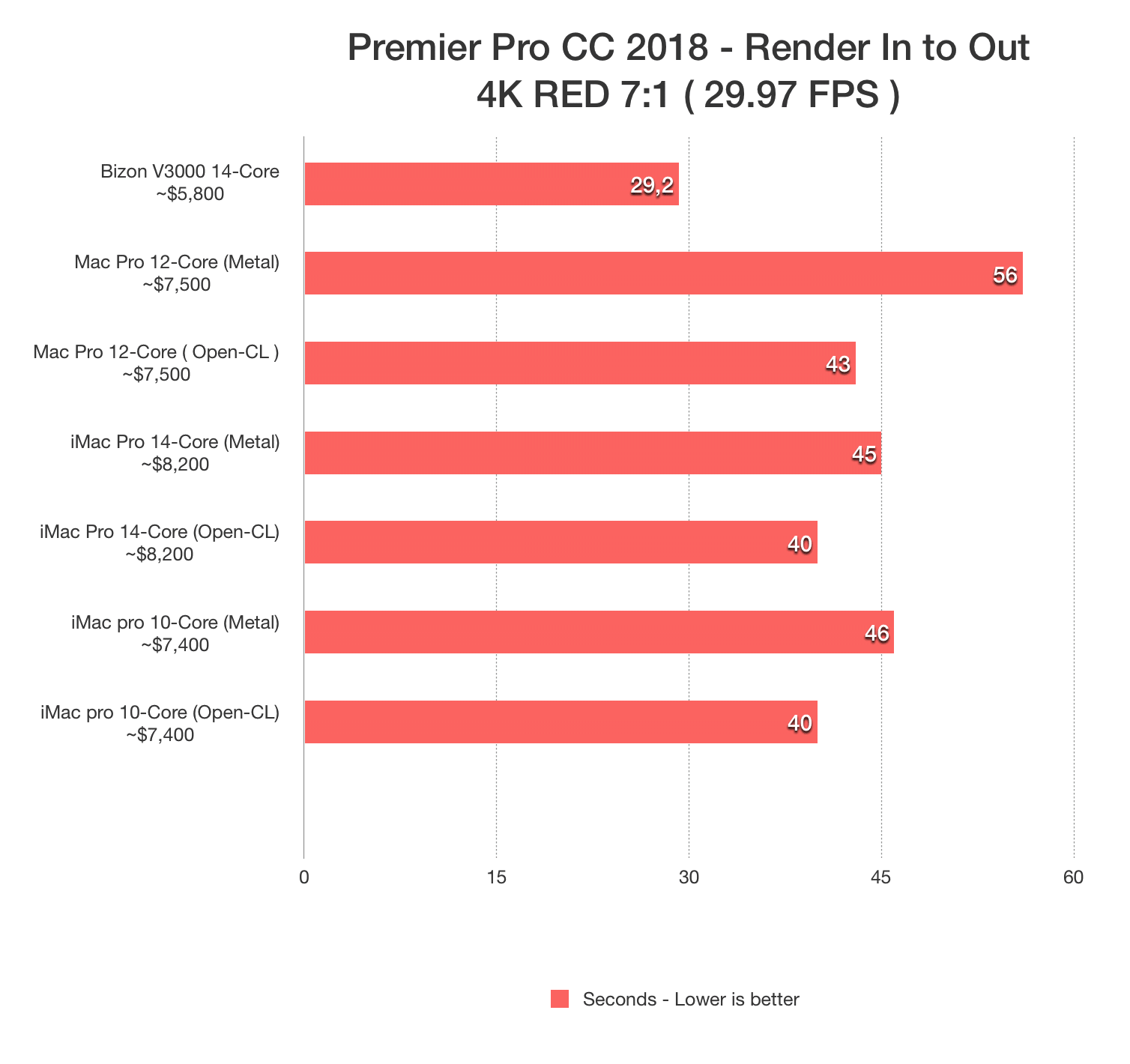 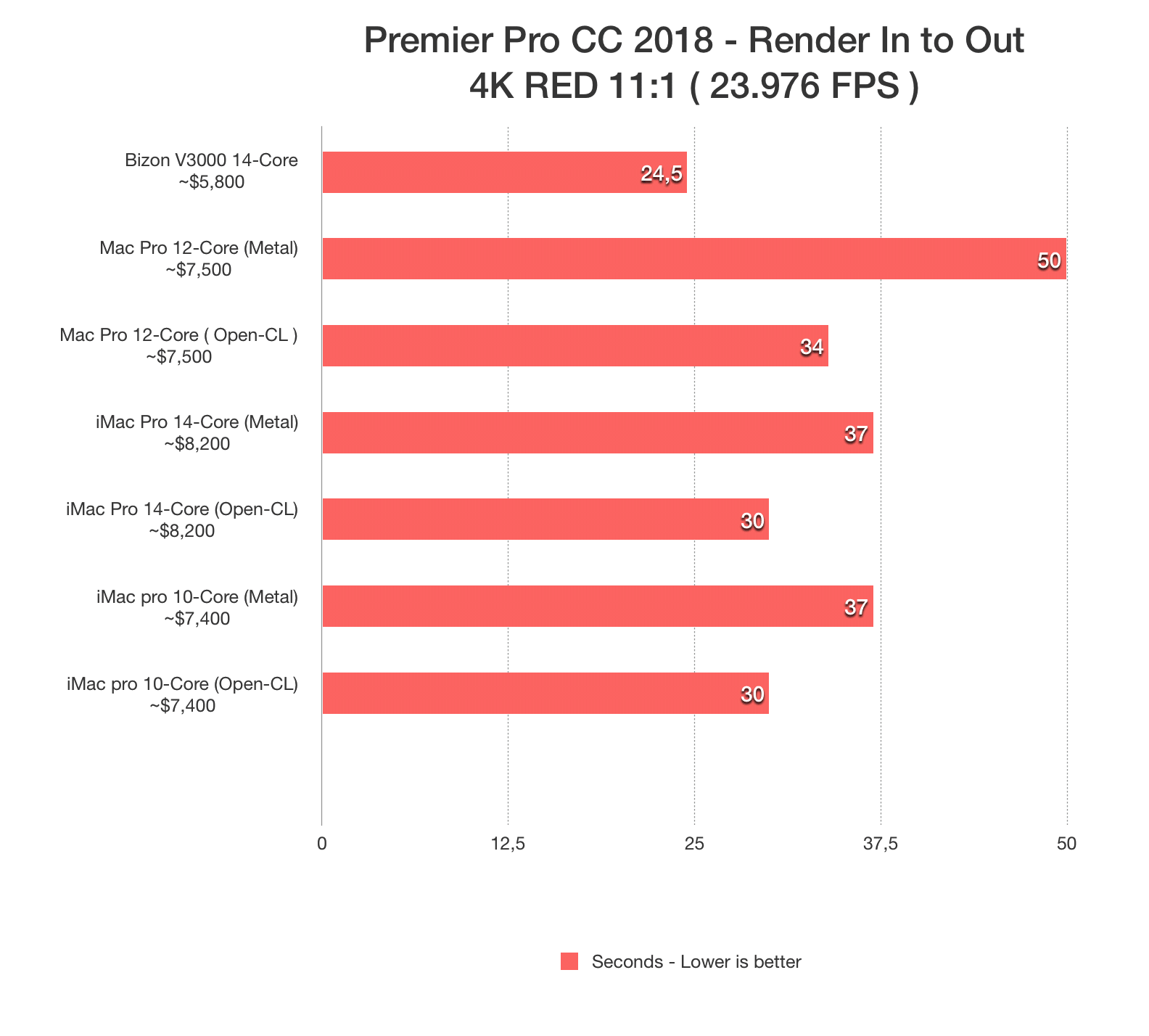 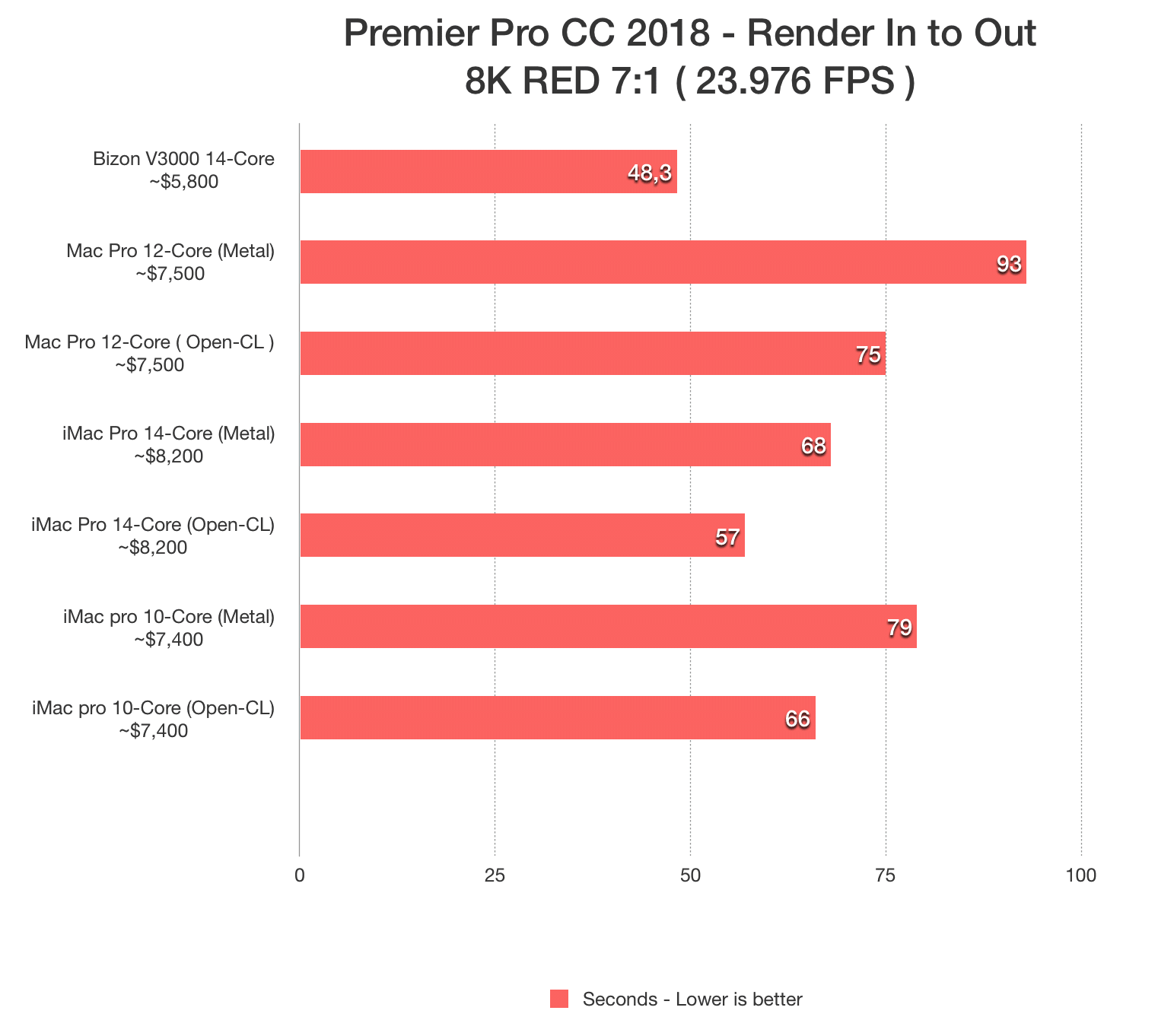 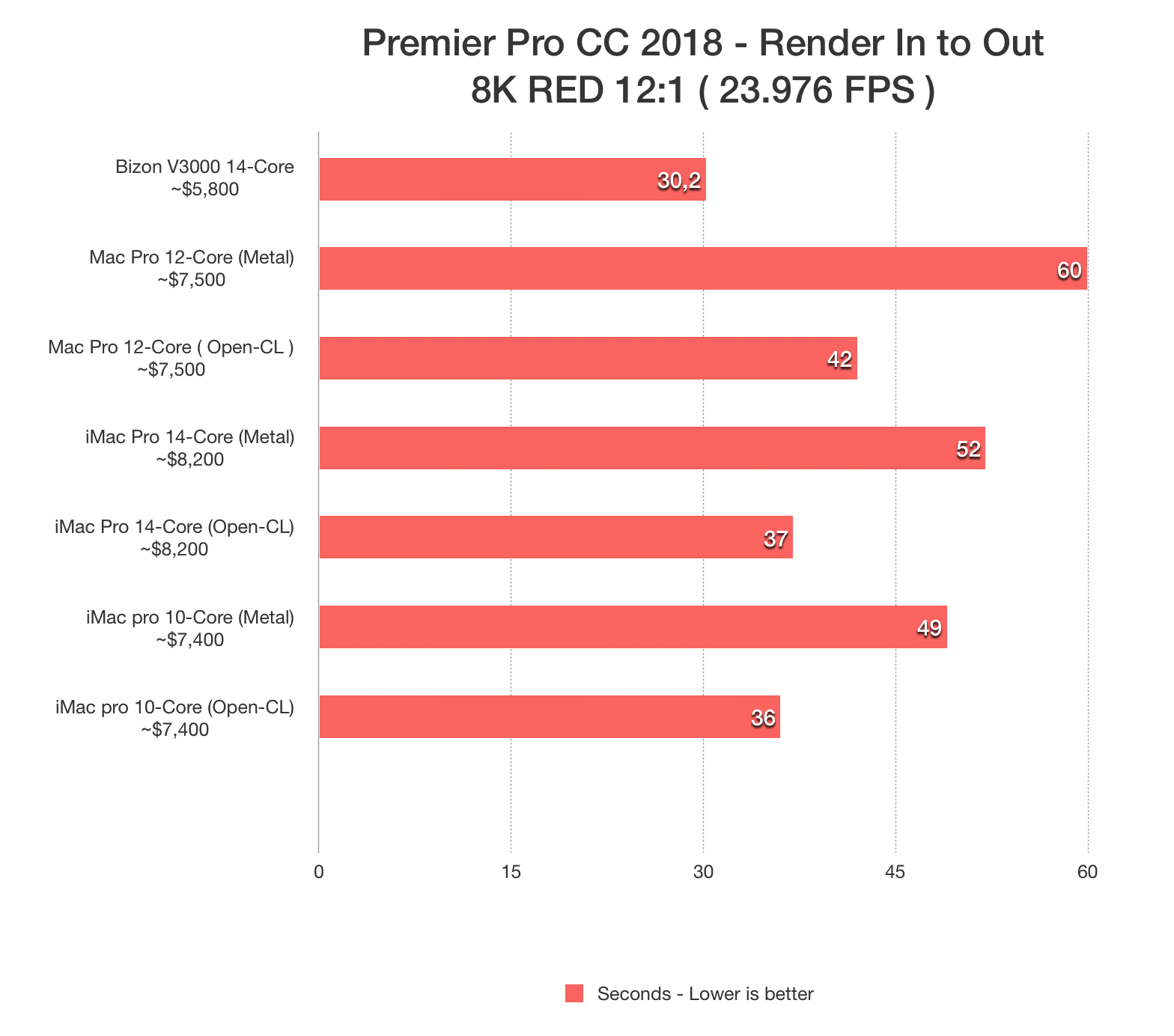 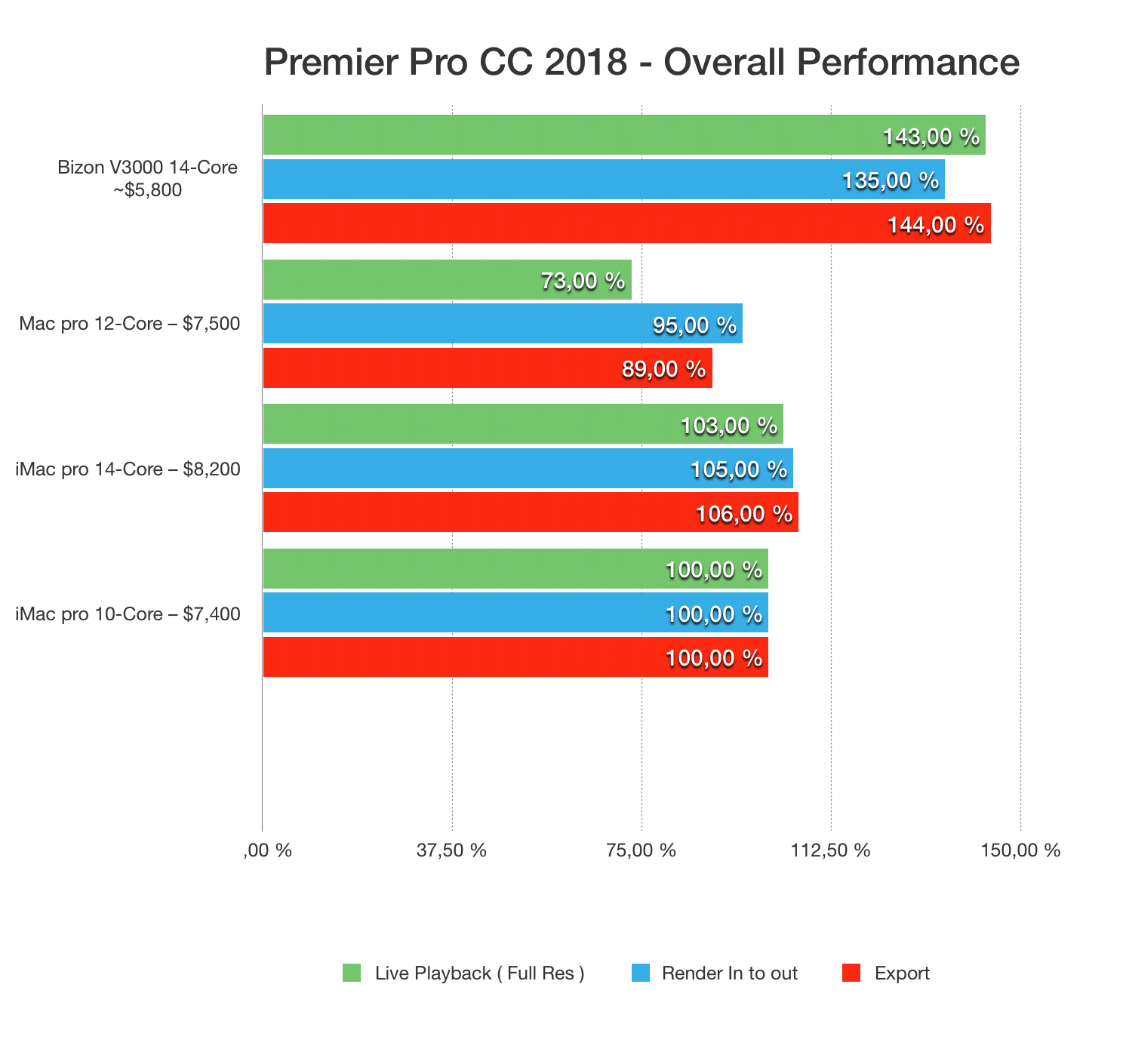 It’s also worth keeping in mind that we paid $420 for a 4K monitor, keyboard, and mouse, so if you already have them you would reduce the costs even more.

In terms of performance the PC Custom Workstation also comes out on top, with a 35-45% performance gain.

What was surprising was that the iMac Pro 2019 14-Core wasn’t that much faster than the 10-core version and only increased in performance by around 5%. However, live playback performance was usually twice as good on the PC, with tendering and exporting being 40-50% better.

Therefore, our BIZON V5000 video editing workstation PC is the clear winner on both cost and performance.

However, if you’re already stuck with a Mac and want to increase your performance, our findings indicate that OpenCL is a better choice for the majority of Mac users, who want better live playback performance, but Metal was faster with non-RED media for exporting and rendering.

For more information on PC performance compared to Mac systems, you can check out our other articles here.

You can also take a look at our Recommended Workstation PC for Premiere Pro and contact us if you have any questions about making the move to PC workstation.

Back to News List
Need Help? We're here to help.